Continuously Open Daily 11:00AM Until 3AM for over 43 Years !
840 Cleveland Street Clearwater Florida 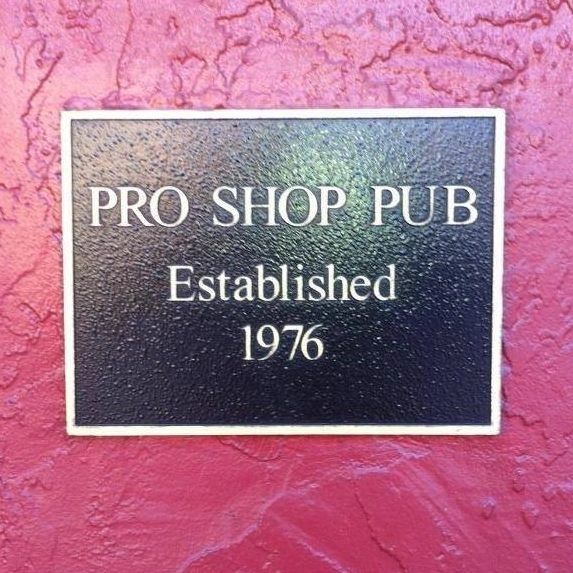 Downtown Cleawater's late night place to be . Open Nightly until 3am.

Tampa Bay areas after work gathering place with the longest running Happy hours. 11am. until 7pm. for over 43 years.

CLEARWATER — One of downtown's oldest businesses is a nondescript gay bar named the Pro Shop Pub.
Drive too fast on Cleveland Street, east of Myrtle Avenue, and you'll miss it — a garnet outpost, brick and glass block, with only "Pro Shop" in neon lights.
That's by design. The pub's obscurity was a defense mechanism. Decades ago, men who went there braved violent, bigoted attacks. The pub served as a sanctuary.
But it was also something else. Birthed in the disco days of 1976, the pub served as a meeting place. It became one of the few places where its patrons could be themselves.


Today, the bar's gay and straight clientele will gather to toast the pub's 35th year. Dancers and DJs and a small sorority of drag queens will lead the festivities. Bar manager Steven Pearson sent out 300 invitations on the labels of eight-track tapes.


They owe that celebration to the humble beginnings of a small, straight Michigan family — a golf lover, his college-age sister and their mother, a spiritual Catholic.


The Pro Shop Pub's history is much less revolutionary. In the '50s, the building held Wings Restaurant, a glass-fronted diner serving the "South's finest ice cream." In the hippie '60s, it became the Confucius Tea Garden. In the '70s, it was a sandwich shop named Kountry Kitchen.


Each business left after a few years until, in 1976, a young mustachioed man named Mike Anderson decided to use the building for his first pub. His family had fled the winters of Flint, Mich., six years earlier, and he and his sister, Patti, took classes at Florida State University. His mother, Gail, recruited Patti to help start the family business.


Mike Anderson had dreamed of running a country club before deciding the job would impede his game, he told the Clearwater Sun. Instead, he settled for the next best thing: a small parlor and eatery, a kind of golfers' lounge. It had a deli with hamburgers, hoagies and coleslaw, a football room with a 3-by-5-foot color television, and plans for a pool table and a golf-club repair shop. On the bar, to cement the sports theme, he decoupaged cutouts of star quarterbacks.


But the pub was a dud. Few diners ate at the deli. The lounge was barren. It didn't help that the closest golf course, Clearwater Country Club, was a mile away.


A year later, the Andersons hired a woman named XXXX to tend bar. Unbeknownst to them, XXXX  was a lesbian, and she invited her friends in the gay community over for drinks. Word spread. A gay bar was born.


The Andersons were taken aback, Mike chief among them, Patti Anderson Lux said. But after nights of standing-room-only crowds, the family grew more accepting. Though she was Catholic, Gail Anderson became especially "protective of the gay community," Anderson Lux said. "In her opinion, God loved everybody."


Not everyone was so welcoming. Visitors faced "gay-bashing" in the parking lots, she said. Gail's car was keyed. The Andersons kept the bar modest, swapping windows for hazy glass blocks. Advertising was solely through word of mouth.


The pub was endangered early on. One Monday afternoon in 1980, a drunk man named Donald Casey punched a woman who rejected him. XXXX  grabbed a pool cue and ordered him to leave, the Times reported.


Casey returned with gasoline, setting wood paneling ablaze. Patrons doused the flames with water-filled beer pitchers. Casey sent apologetic letters to the bar from a mental hospital, asking to be electrocuted or sent to a communist country, according to the Clearwater Sun. He was later sentenced to 15 years in prison.


But the pub's days of controversy were far from over. In 2001, after ordering from Pizza Hut, some patrons saw that the delivery slip showed a code name for the pub: "some fag." The pizzeria chain apologized and offered free food, Pearson said. The bar has yet to call it in.


Years earlier, a church group waged a letter campaign against the pub after claiming that a rusty pipe bracket on its roof looked phallic and obscene. Pearson said the pub staff had never looked at it that way.


The furor died down. The pipe still stands.


At 21, he was no stranger to drinking halls. He had often played the part of a straight man, hiding that he was gay. Finally, he decided it was time to try something different. He and a friend from Dunedin High School went one night to the Pro Shop Pub.


But what he found was anticlimactic, he said — the crowd was just like he was. Patrons were friendly. They made him feel comfortable, "not like some kind of freak." Over years of Bud Lights and shots of Jagermeister at the bar, Binns made some of his closest friends. Five years ago, he was hired as a bartender.


"If you've never been to the Pro Shop, you can't officially be gay," Binns said. "It's a rite of passage."


Binns helped decorate the pub this week for its anniversary, hanging white and yellow petal paper. Today, the pub will put up tents and balloons.


Anderson Lux, who still owns the pub, will be there. After years as a teacher at UPARC and a manager at Neighborly Senior Services, she left to oversee the pub full time. Mike Anderson left years ago, opening bars in St. Petersburg before buying a farm for race horses in Brooksville.


The last of the founders, Gail, won't be in attendance. She died 10 years ago, right around the pub's silver anniversary.

Better yet, see us in person!

We love our customers, so feel free to visit during normal business hours.

Drop us a line!